Recollections of War: The Battle of the Falaise Pocket

The Battle of Falaise, officially fought from August 12 - 20, 1944 was one of the hardest fought battles during the Allies campaign to liberate Europe.  At the end of the major portion of the fighting over 15,000 troops from both sides lay dead.  But the Allied breakthrough from Normandy was eventually completed and the German Seventh Army was no longer to oppose the British, Canadian, and American forces in Europe.

The Battle of Falaise began when the German counter-attack on the American forces near St. Mortain was forcefully stopped by the US 30th Infantry Division on August 11-12.  Thus the German Seventh Army found itself becoming trapped between two Allied lines of advance.  The British and Canadian Divisions were coming east and south from Normandy, while the Americans were advancing north-east up from the south of France and Italy.  The epicenter of the final position of the Allies was the town of Falaise.  Study the map to the right for an excellent strategic view of things.


While the Americans were making steady progress north, the Canadians were meeting heavy opposition.  The 2nd Canadian Division on August 14 was heavily repulsed, but on August 16 they broke through the German lines, and the next day, Falaise was captured and fell into Canadian hands.  But the Battle of the Falaise Pocket was far from over.
The initial objective was to encircle the German Seventh Army and link up with the Americans at Argentan, but this was then changed to the villages of Trun and Chambois by Gerneral Montgomery, who realized that the line would possibly be too weak to stem the German retreat at Argentan, and so ordered a stronger line formed with the capture of the latter villages.  This was finally accomplished on August 18th with the 4th Canadian and 1st Polish Armoured Divisions capturing, respectively, Trun and Chambois.

Finally, the destruction of the German Seventh Army was achieved.  The Battle of the Falaise Pocket was over.  10,000 German troops were captured, and a large part of France was liberated.  Within a few weeks more, the western part of Europe was liberated from the Nazi occupation - from the Atlantic Ocean to Paris.  But at what cost?  Over five thousand Allied troops were casualties of the terrible fighting over the course of that one week.  Granted, it was considered the price that had to paid for many heroic stands and assaults, but in the end, war is a terrible thing. We should not glorify war, but we should remember and thank those who fought for freedom.

On a related note, to the left is a photo of one of the actual maps issued to Canadian troops when passing, or as the case might be, fighting through Falaise.  My Grandfather brought this map back home with him after the war, and we found it just a few days ago.  He well remembers using it to navigate as his workshop which he commanded passed through Falaise following the Canadian artillery on its way through Europe.

Written and Posted by William A Moore 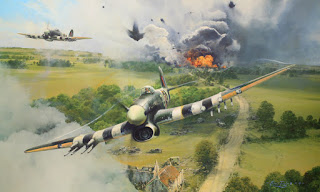 Please feel free to respond below regarding this post!

Subjects I Write About: